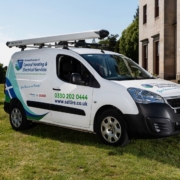 Saltire, who already operate in the area having won contracts with Perth & Kinross and Angus Councils

Saltire, who already operate in the area having won contracts with Perth & Kinross and Angus Councils, plan to open a Dundee depot and utilise their relationship with other United Capital group businesses; Dundee-based McGill and electrical company Alliance Electrical, to win more business across the East of Scotland, from Edinburgh to Aberdeen.

Saltire General Manager John Reynolds commented; “It has always been our plan to push more into the East coast and being part of a larger group after our recent acquisition allows that to happen faster. We have already been successful in winning contracts with Perth & Kinross and Angus councils and look forward to building on this success.”

New owners, United Capital and their experienced board of directors will support the existing management team at Saltire to achieve their ambitious growth plans.

John Reynolds added; “Saltire will seek to win public sector contracts through competitive tendering and great customer service, a reputation that we have worked hard to build up. We will also roll out a large domestic heating marketing campaign and look at growth by acquiring other East Coast operators.”

Saltire Facilities Management, head-quartered in Bellshill, Glasgow, is a national provider of central heating and electrical services and, with over 320 direct employees and an annual turnover of £30 million, is one of the largest of its type in the UK. The Dundee depot will be the fifth company office in addition to those already operating in Glasgow, Dumfries, Stranraer and Birmingham.

Saltire was acquired by United Capital in May as part of the investment group’s ambitious buy-and-build strategy which sees the company target the acquisition of UK building services and facilities management companies with a collective turnover of £300million over the next three years.

This site uses cookies. By continuing to browse the site, you are agreeing to our use of cookies.

We may request cookies to be set on your device. We use cookies to let us know when you visit our websites, how you interact with us, to enrich your user experience, and to customize your relationship with our website.

Click on the different category headings to find out more. You can also change some of your preferences. Note that blocking some types of cookies may impact your experience on our websites and the services we are able to offer.

These cookies are strictly necessary to provide you with services available through our website and to use some of its features.

Because these cookies are strictly necessary to deliver the website, you cannot refuse them without impacting how our site functions. You can block or delete them by changing your browser settings and force blocking all cookies on this website.

These cookies collect information that is used either in aggregate form to help us understand how our website is being used or how effective our marketing campaigns are, or to help us customize our website and application for you in order to enhance your experience.

If you do not want that we track your visist to our site you can disable tracking in your browser here:

We also use different external services like Google Webfonts, Google Maps and external Video providers. Since these providers may collect personal data like your IP address we allow you to block them here. Please be aware that this might heavily reduce the functionality and appearance of our site. Changes will take effect once you reload the page.